The grand illusion show of the magician THE MAGIC MAN is a highlight for really big events – This program consists of fascinating and unbelievable stage illusions on stage that you do not get to see every day. In addition to the magician, two or three pretty assistants provide great entertainment with their dance numbers, during the magicshow. With this performance, Willi Auerbach qualified for the German Championships of Magic Circle. You will be enchanted by this unforgettable spectacle! The duration of this presentation can be between 10 and 45 minutes and is suited for a very large audience. Photos of the stage illusion show can be found here.

Illusionist THE MAGIC MAN overcomes gravity and moves weightlessly in space above the stage. During the presentation he floats over the stage more than two meters. He is can move in all directions and even fly through a solid metal ring. Willi Auerbach showed that illusion at the German Championships in Stuttgart in front of around 1,000 spectators. A video of the large scale illusion can be found here: flying magician on YouTube 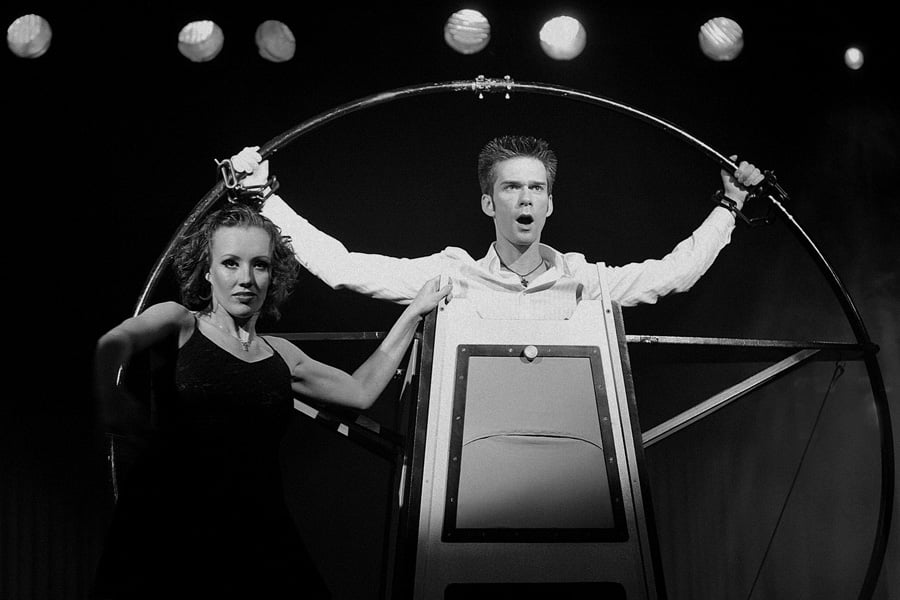 Overview of the various grand illusions:

SWITCH : fast change of positions in seconds between assistant and magician

REVENGE ILLUSION : magician changes place with the assistant who is confined to a grid

D-LIGHT : A magical red light spot jumps through the air

PIERCED : The magician gets  speared by a metal dagger

BASE : Assistant appears in a fireball

INTERLUDE : assistant penetrates the belly of the illusionist

JACKET ILLUSION : A tied up assistant is suddenly wearing the jacket of the spectator

Magicshow for a big audience

Magic tricks fascinate mankind since ever. Nowadays there are many magician showing their magic worldwide. But there are not so many magicians with large scale illusions. Most of the magicians work for a smaller audience. But the MAGIC MAN travels with big equipment and impressing magic effects. Most of the time Auerbach performs live in front of the spectators. But from time to time he performs his magic also in TV. Get more information about his television experience here: Magician  TV